Hmmm Article – Are We Alone?

By Craig G October 4, 2010
Videos and Images Courtesy of CNN/You Tube, lamarzulli.files.wordpress.com, wearestjohns.com
A recent influx of Intergalactic activity has hit the media hard within the past few years. Speculation has always been present in the thought of us not being the only intelligent life within the universe. A multitude of movies, TV shows, and books have reinforced the natural deep down belief of most individuals that we are not alone. 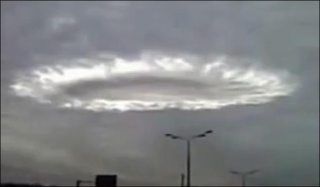 Halo Cloud formation over Moscow, Russia October 2009
These speculations are often accompanied by a multitude of reported sightings by individuals of unidentified flying objects in the sky and personal encounters with unknown life forms. This past month has seen a report released per the freedom of information act of UFO’s visiting nuclear silos on bases worldwide. The reports submitted by then members of the armed forces who work on the bases state that they saw these glowing UFO’s hovering over the bases at which time Missiles were offline while this phenomenon was present. Missiles would then go back on line when the UFO’s left. The former airmen claim that certain institutions choose to keep this information from the public and will continue to do so. 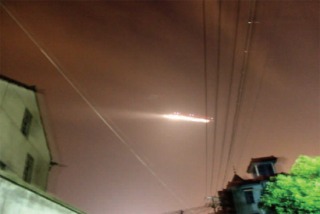 Mysterious hovering light over Beijing, China July 2010
Recently in the news there was a story that the United Nations was allegedly to appoint an ambassador for outer space in the event that extra terrestrials were to make contact with our planet. The UN chose to implement the plan with the recent discovery of an alternate solar system with planets that also orbit a main star similar to our sun. To add to that scientists believe that one of these planets is very similar to Earth and may be able to support some forms of life or, may have life on it already. Mazian Othman has been chosen to take the position and is an astrophysicist from Malaysia. The Astrophysicist has since denied ever being approached for such a task.
Physicist Steven Hawkins has been quoted as saying that mathematically, alien life forms most likely exist, and trying to contact “intelligent” forms of life could be a bad move as in most cases these beings would be looking to possibly colonize in search of new forms of natural resources. These beings would think just as any human would as we have seen in history. Case in point, Christopher Columbus and the natives of the Americas and the Caribbean islands.
Attached below are a few snippets of videos pertaining to this article from CNN.

2 thoughts on “Hmmm Article – Are We Alone?”