Movies that may have potential – The Expendables 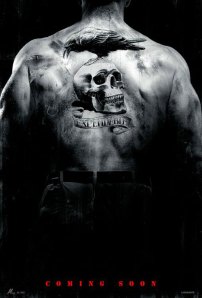 Picture this cast….
Sylvester Stallone
Jason Statham
Jet Li
Dolph Lundgren
Randy Couture
Terry Crews
Eric Roberts
Steve Austin
Mickey Rourke
Bruce Willis
and Arnold Schwarzenegger
Can you imagine the amount explosions, carnage, and one liners?
The movie, written and directed by 63 year old Sylvester Stallone is about a crack commando unit that was sent to prison by a military court for a crime they did not commit.
Lol just kidding.
The plot is actually about a group of elite mercenaries that are put together to by world leaders to assassinate a ruthless South American dictator. This is the greatest combination of action movie heroes of the 80’s and 90’s but where are Seagal, Van Damme, Beihn, Russell, Gibson, Norris, and Snipes???
The movie is supposed to be released this summer.
No official site is up yet but a trailer courtesy of youtube is posted below.
http://www.youtube.com/watch?v=klnctxbAz1U